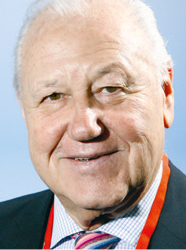 was born on April 16, 1933 in Vienna as son of Karl Mathias Blecha, a Vienna municipal officer, and Rosa Blecha, née Nimmerrichter, from Lower Austria.

After his baccalaureat, passed at Bundesrealgymnasium Döbling, Karl Blecha studied psychology, ethnology and sociology at the Vienna University, and began to work as a vocational consultant for the Vienna Regional Employment Office, then became advertising manager of a publishing company, lecturer in sociology, and from 1963 to 1975 he was head of the Institute for Empiric Social Research. Under his direction this institute became one of the leading research centers for applied sociology in the German-speaking countries. He was member of the board of various Austrian and international scientific associations, was secretary of the Society for Sociological Studies, Vice-President of the Austrian Society for Sociology, and he is still President of the Austrian Society for Promotion of Research. He has written numerous essays on sociology and various articles and brochures on political principles.

The most distinguished research-outcome was without doubt the “Opinion-Leaders-Index“, which Blecha developed in 1969 to record the opinion of special personalities, who can be indicated as a predictor of the general development of opinion. In 1979 Blecha established a computer-model for multi-variating-analysis to analyse and interpret of election-returns and he is co-founder of the streams of election-population, which is in use till today.

After his political carrier he founded 1989 the MITROPA-Institute for economic and social research ltd, where he is Managing Director. MITROPA is an independant research and service institute. It supplies information for decision and gives support to economy, research, administration and media. It is mostly working in countries of Middle and Eastern Europe, where a new economic system is introduced after the revolutions in the year 1989.The institute supplies clients with export data in those countries. Moreover, it selects and stores data of market- and public opinion research. Representative surveys are done with face-to-face-interviews and telephone interviews as well. It handles the coordination for media research (press, radio and TV ratings) and election research. The organization and coordination of comparative studies in economic and social research is one of the task of MITROPA. As service-institute it supplies its clients with data selection, -preparation, -processing, -administration and representation of data. Branch offices in Prag, Budapest, Sofia, Ljubljana, Minsk and joint ventures (MITROPA-Institute-Zagreb, MITROPA-Institute-Bratislava), partner institutes (MITPOL-Warschau, IRSOP-Bukarest, MNENIE-Moscow) and consultants are working in all regions of Middle and Eastern Europe.

In 1964 he became member of the board of the Socialists of Lower Austria, and in 1985 Deputy Provincial Party Chairman. The province of Lower Austria, where he spent the first months of his life, and where he has his habitual place of residence since 1971, has become his political home. From March 1970 to June 1983 and 1989 he was member of the “Nationalrat" and spokesman for justice, science, culture, media and defence issues. Karl Blecha was in 1970 the first one in Parliament to sign the Socialist Party´s motion to reduce the period of basic military service to six months. He introduced the marriage allowance of 15.000,- Austrian Schillings in 1971, he participated in all legal reforms performed since 1970, was involved in amendments of election and party laws, in school and university reforms and also considerably in the reform of the Austrian Broadcasting in 1974. He also dealt with community and security policy.

Within the Socialist Party he is regarded as driving force of the party reform of 1976 (creation of the “Open Party"), and was chairman of the Editorial Committee for the party programme in 1978, which was drawn up by him. In his capacity as Minister of the Interior he introduced new forms of the so called Citizens´ Service, improved the technical equipment of police and gendarmery, reformed the basic training of law enforcement officers, which was extended to 24 months, introduced employment of female gendarmery officers, initiated the installation of Civil Defence in Austria, and one of his main concerns has been increased communal autonomy. He has also improved international co-operation in the filled of combatting terrorism and narcotic drugs delinquency.

Since 1969 he has held various functions in the Austrian Society for Cultural Policy, at present he is Chairman of the Board of Governors. He is President of the Society for Austro-Arab Relations, of the Austrian-Bulgarian Society and the traditionary Vienna Workers´ Gymnastics and Sports Club, and 1999 he was elected President of the Austrian Association of Pensioners with more than 350.000 members and also of the „Österreichischen Seniorenrat“.